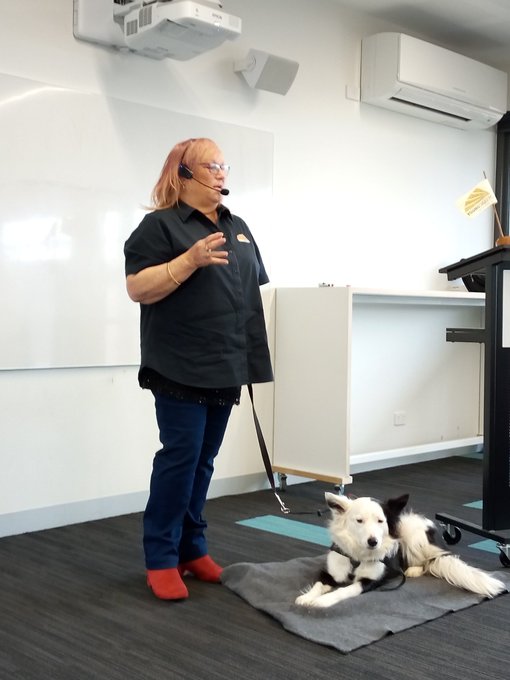 On August 2nd U3a SurfCoast had a visit from Carole Doyle from Young Diggers and Dusty, a Border Collie, an Assistance dog trained to work with people affected by PTSD (Post Traumatic Stress Disorder), particularly returned servicemen, ambos and police.

Carole kept the attention of an audience of thirty plus, speaking from personal experience, having lived with a husband who suffered from PTSD. Her talk explained what happens psychologically and emotionally to someone suffering from PTSD and how matching such a person with an Assistance dog has miraculous results. The long term effects of PTSD can be devastating – inability to socialise, always on high alert and prone to rage as well as addictions. In 2017 alone there were estimated to be 87 suicides from members of the armed services.

Carol, who has worked for more than five years as a dog Ambassador for Young Diggers, also received an Anzac of the Year Award and took Dusty, who was found on the side of Western Highway in Victoria and ended up at the Melton Pound, through a series of actions demonstrating her abilities as an Assistance dog, before being allowed to do the rounds of the room and receive “treats” from the audience.

Many of these dogs are in fact rescued from the pound but undergo a series of tests before undergoing training for four years before becoming companions to someone needing that assistance. Carole has seen the program, currently training 22 dogs in Victoria, changing the lives of people with PTSD. “Responsibility for the dog”, says Carole “takes people out of their condition and gives them something to live for.”

Carol, who works 70 volunteer hours a week, says, “How could I not love what I do when I see the effect on people who need help?” Carole’s stories, straight from the heart and laced with humor, together with the gentle presence of Dusty seemed to create in the room the very oxytocin that Carole says dogs produce in their companions.

“Looking into a dog’s eyes”, says Carole “is better than an hour of yoga.”