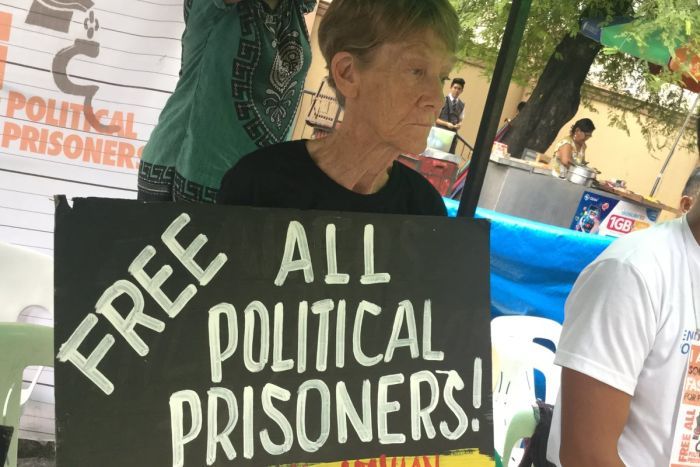 Sr Pat made international headlines in 2018 when she came under the wrath of Philippine President Duterte and ultimately was deported back to Australia in November last year, charged with “disorderly conduct.” Sr Pat, who grew up in Melbourne, studied  Law at the University of New South Wales, worked in legal aid in Broadmeadows before going to the Philippines in 1990, explained how she found herself in such a dangerous and invidious position.

On May 10th around seventy people attended a U3aSurfCoast Occasional Lecture by Sr Pat Fox, Catholic nun and social justice activist. This was one of the largest audiences yet attracted by these regular Occasional Lectures and many non U3a members attending were also interested in her story.

President Rodrgigo Duterte, who has been accused of ordering the execution of around 22,983 “alleged” drug dealers, accused her of treating “the Philippines like a mattress to wipe your feet on” and told her not to “insult us every time you open your mouth”.

Sr Pat’s lecture was set against the history and politics of a nation twice a colony under both Spain and America where corruption in politics and institutions is rife. She spent most of her nearly thirty years in the Philippines working for the rights of workers, farmers and students and a number of her own friends and co-workers have been the victims of extra-judicial killings. She says she could never have continued her work without the courage and enthusiasm of incredible Filipino people.

Sr Pat also questioned the policy of the   Australian government which for 2019-20 will support the Duterte government, with an estimated $79.7 million as part of its Australian Official Development Assistance (ODA).  In March this year, Duterte announced that the Philippines would withdraw from the International Criminal Court (ICC) “effective immediately” in response to the ICC’s move in February to launch a preliminary examination of “drug war” killings to determine whether to open a full-blown investigation.