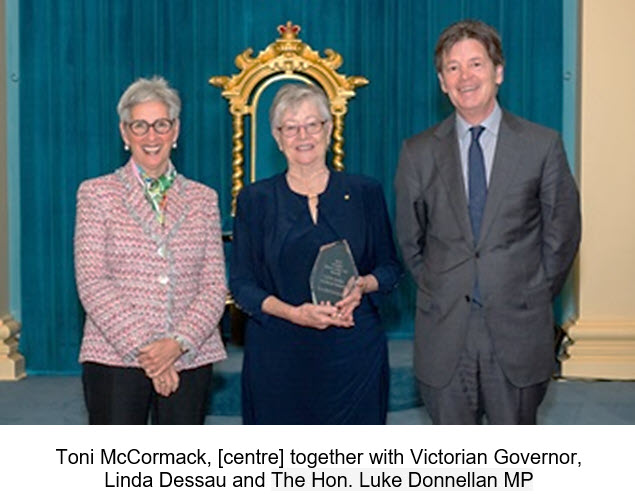 Having been nominated by U3A Surf Coast for a 2019 Council Of The Aging [COTA] Victorian Senior of the Year Award, U3A Surf Coast member Toni McCormack received the award from the Victorian Governor, Linda Dessau and the Minister for Disability, Ageing and Carers, The Hon. Luke Donnellan MP, in a ceremony at Government House on October 22nd, along with twenty other recipients.

The award was presented for her work in instigating the rapid growth of U3A Surf Coast membership over the past four years.  She was acknowledged for her “outstanding strategic planning and project management skills which she has also brought to bear on two other important local community-based organisations – Probus and the Torquay Community House.”

The award acknowledged that Toni has “harnessed the mutual interest these organisations have in creating age-friendly communities to ensure that the Surf Coast area offers a very diverse range of activities and events for older residents. Her referees are the Surf Coast Council, Torquay Community House and the Lions Club.”

In conferring the awards, the Governor emphasised the rapid growth of the aging population in Victoria and the need to “see the older demographic as a resource rather than a burden.”

U3A President, John Bartlett and Vice-President Sue Crowe were also part of the celebrations which included refreshments served after the presentations.